FOGcon starts later today. It’s a small con for fans of genre and an event that I’ve gone to several years in a row. I usually try to read at least one book by each of the Honored Guests ahead of time, so that I’ll know their work when I see them speak. I’ve been a little behind on this “homework” this year and have only managed to get one read in so far — The Liminal People by Ayize Jama-Everett. 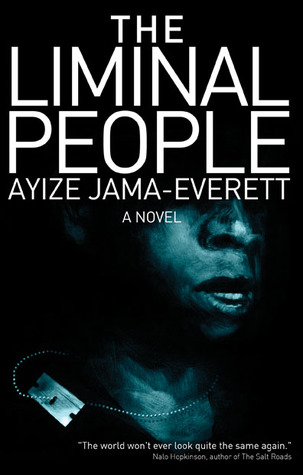 The Liminal People is a scifi crime novel centered on Taggert, a man with the power to heal or hurt the people around him. He serves a ruthless man and has done terrible things in the course of his work. Although he dislikes it, he has made peace with his life — until an ex love asks for his help to find her daughter. The search for the girl leads him into a face-off with others with enough power that they seem to walk the borderline between human and god.

Taggert is an interesting character, bordering a line between hero and anti-hero. He’s capable and willing to be cruel and violent, but his cruelty is mostly associated by the way he’s been trapped into his current life by his master, Nordeen. Taggert also acts to protect the people he cares about, even if it means personal danger to himself.

The novel is a great crime/action thriller that sets up an interesting world, in which powerful people have the ability to manipulate the world (which kind of makes us ordinary humans feel rather small) Being both on the shorter side and fast paced, it’s a quick read (perfect for where my head has been at lately). I’m looking forward to checking out the other two books in the trilogy, The Liminal War and The Entropy of Bones.

Next up in FOGcon homework is The Evil Wizard Smallbone by Delia Sherman, who is also an Honored Guest at the event.

A couple of weekends ago — has it been that long? — I traveled up to exotic Walnut Creek to gather with fellow readers and writers to talk about genre books, movies, and other bits of geekery at FOGcon. As always it was a fun event, which included tons of coffee and a little booze and karaoke and other such things.

Lots of great thinky things at the panels this year to mentally chew on. Nom, nom. The panels tended to be more focused on science discussions that reading and writing discussions, but it was fascinating nonetheless.

The Developing Reality of Intelligent Machines looked at how AI is perceived in fiction and films as a self-aware being compared to how intelligent technology in the real world today is being used to provide better ways to solve problems. The intelligent machines of today are incredibly advanced in how they have been programed to serve human needs. But, as the panelists noted, these computers and machines are limited to their programming — they will do what they are programmed to do. So the concern is not so much about machines suddenly becoming self aware and taking over the world, but who is running the machines and to what purposes are they setting them to.

And even if a machine were to become self aware, it would be questionable as to whether human beings would recognize the moment when it occurred. It’s assumed (in movies and fiction) that AIs would think in the same ways that we do, however, that is not necessarily the case. Someone from the audience stated that the singularity is now, bringing up the game of Go (apparently more complex than chess) taking place between a computer and Go champion that evening (which the computer won).

The From Caterpillar to Butterfly panel delved into the weirdness of nature, from parthenogenesis to penis fencing flatworms to interesting mistakes in biology. We discussed the adorable tardigrade, or water bearer, an adorable micro-animal that is the only creature known to be able to survive in hard vacuum; a multitude of amazing plants (such as a vine that can change its leaves to match the tree they’re on); and animals that can change their gender (such as the clown fish, all of which are male, except for the biggest and baddest, which becomes the only female). The lesson, for me, was that in designing alien or strange species of animals with interesting biology and social structure, a writer can definitely turn to the natural world for inspiration of many kinds. Recommended Reading: The Ancestor’s Tale: A Pilgrimage to the Dawn of Evolution by Richard Dawkins and Dr. Tatiana’s Sex Advice to All Creation by Olivia Judson.

Other great panels (which I’m going to go into less detail on, because time):

The Ethics of Magic discussed how the rules of magic are presented in stories. For example, the rules of Star Wars present the Jedi as the “good guys” despite some deeply troubling and morally ambiguous aspects to their order. Recommended Reading: Wildseed by Octavia Butler.

Are 72 Letters Enough? In Search of a Perfect Language tried to define what was meant by “perfect.” For some this was a language that was unabiguous and complete, able to portray every thing in existence accurately. The discussion lead into how often the concept of the “true name” for things comes up in fiction, among many other things. Recommended Reading:  The Search for a Perfect Language by Umberto Eco and “TAP” by Greg Egan.

Homo Sapiens Tekhne: Assistive Devices and Body Modification in Science Fiction and Fantasy looked at the past and present of human body modifications, from tatoos and piercings to assistive devices and cell phones, as well as looking at how body modification is handled in stories. Recommended Reading: Runtime by S.B. Divya.

And finally, Domestic Fantasy: Transforming the Domestic looked at how the domestic scene, family and home, are portrayed in fantasy stories. Recommended Reading: Necessary Beggar by Susan Palwick and Little, Big by John Crowley.

I went rather light on the book haul this year, as I was trying to keep my bookshelves from topping down and crushing me beneath a ginormous pile of books. My grabs:

FOGcon is one of my favorite events of the year, and already I’m looking forward to 2017. The theme next year will be Interstitial Spaces (intermediate spaces between one thing and another), which is a topic I find fascinating.

So many things this week!

Tuesday, I checked out the Alchemy Slam & Open Mic at the F8 Lounge in San Francisco, which is a homey, intimate space. My plan was to simply kick back and watch the amazing Allie Marini and Brennan DeFrisco perform, but I got talked into pulling putting my name on the list. It was a wonderful experience in terms of both listening and speaking, due in a large part to the great group of people who were present.

Over the weekend was FOGcon, three days of talking all things genre and geeking out with friends and meeting authors and hoarding books and generally having a good time. I’ll being doing my usual report later this week.

And finally, for week two of the March Around the World movie watching challenge, I watched: A Girl Walks Home Alone at Night (Iran), Bangkok Love Story (Thailand), Volver (Spain), The Snapper (Ireland), The Assassin (China), and Sin Nombre (Mexico).

The Lifecycle of Software Objects by Ted Chiang, which was supposed to have been FOGcon homework. The story involved the creation of AI creatures in a virtual space, at first as

My writing was slim this week, though I mostly managed to keep up with all the collaborative projects I’ve been working on. But FOGcon and the movie watching challenge have taken giant bites out of my writing time. This weekend will be rough in that regard, as well, because I have plans to help my sister paint her house this weekend.

However, since I signed up to participate in Get Lit in Oakland tomorrow, where I am required to present new work, I will be compelled to get something down on the page this week.

Goal for the Week:

A Crash Course in the History of Black Science Fiction, as presented by Nisi Shawl.

Five Signs Your Story Is Sexist

My weekend was filled with FOGcon and I’m pleasantly exhausted. It’s always a blast to go, reconnect with friends, and talk about speculative fiction and movies and other geekery. This year I also did karaoke for the first time and despite my pounding heart had quite a lot of fun.

Catherynne M. Valente and Kim Stanley Robinson were the Honored Guests, and they both were wonderful speakers, providing some great insights on the panels.

I enjoyed just about every panel I went to, but here are a few of my personal favorites.

One especially interesting thought, for me, was the idea that nested stories reflect how life works, in that we are the center of our own stories and our lives are filled with interjections and asides, from the gossip we tell a friend to the stories we relate about ourselves to the wikipedia article we pause to look up in the middle of a conversation. We are constantly stopped by interjecting narrative and it was even suggested that we are the frame narrative for every book we read.

For writers, it was noted that nested stories can sometimes be an engaging way to slip in exposition, reveal layers to the world, or characterization. However, the story needs to be just as compelling as the main (frame) narrative. Since it is interrupting the narrative flow, the first line of the interjected story had better be better than what came before it so that it doesn’t turn readers away. It was also noted that some nested stories work better as fragments instead of complete tales.

Notable book recommendations:
The French Lieutenants Woman, by John Fowles
Was, by Geoff Ryman
Order of the Stick, comic by Rich Burlew

END_OF_DOCUMENT_TOKEN_TO_BE_REPLACED

I’m stoked to be attending FogCon this weekend, where Kim Stanley Robinson and Catherynne M. Valente will be honored guests. In preparation for the excitement, I’ve been doing some homework to mentally prepare by reading Red Mars by Kim Stanley Robinson and Six-Gun Snow White by Catherynne M. Valente. Joanna Russ will be the Honored Ghost, so I am currently rereading The Female Man.

While both authors write very different kinds of books, they each present richly detailed universes.