A lot going on the past few days, so I’m coming in a little late, but here’s September in books, movies, and more. 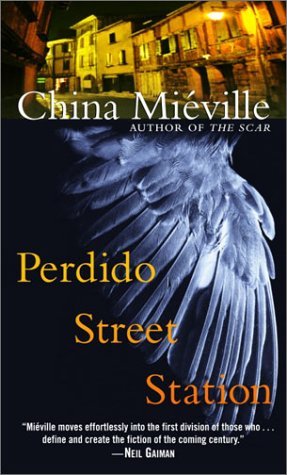 I really enjoyed Perdido Street Station, by China Miéville, even though it took a ridiculously long time to read. It was worth it, but it seriously took forever to read.

Miéville presents an ornately complex city, operating on a mixture of steampunk science and magic, layered with neighborhoods, districts, slums, and inhabited by numerous intelligent species from humans to khepri (insectile humanoids), Garuda (birdmen), cacti men, and other beings. Everywhere is slick and reeking with filth and squalor (although it’s noted that there are rich burroughs that are less so. It’s a fascinating place, although one I’m not sure I’d want to visit.

The story spends some time getting to know the main characters, alternating between their POVs and adding more characters as it goes along building to a catastrophic moment that unleashes danger and fear on the city. Those first 200 or so pages are necessary to making the novel work, but I had a hard time getting through them (almost too much information to be absorbed). When the action finally gets started things become gripping while still being richly detailed. A great novel, but it definitely took some work to get through.

I did a reread of Bird by Bird: Some Instructions on Writing and Life by Anne Lamott, which was a nostalgic experience that I talked about elsewhere.

Skim by Mariko Tamaki and Jillian Tamaki is a beautifully illustrated coming of age story set in the ’90s. Skim is the nickname of a not-skinny high school girl, who discovers how much first love delights and hurts. Friendships change, fall apart or grow. The school goes into frenzy of “embracing life” when a boy commits suicide. And somewhere a long the way, a teenage girl, who loves Wicca and goth culture, can figure out a little more about who she is.

Another loverly graphic novel is Jane, the Fox, and Me by Fanny Britt and Isabelle Arsenault. In Hélène is a you woman being tormented by her peers, former friends who now bully her, calling her fat and writing messages on the bathroom walls. One of the way she survives this loneliness and torment is to fall into the pages of a great book, Jane Eyre. It’s a story about how literature and small magical-seeming moments can keep you going through the terrible times of your life.

I particularly love the art in this book. It’s crisp and brightly colored in presenting the story of Jane Eyre and muted sketches with beautiful soft scenery when presenting Hélène’s daily life. It reveals how stories and imagination can feel so clear and vibrant, while the real world feels dull and undefined. Such beautiful art.

Books Finished:
1. Perdido Street Station, by China Miéville
2. Skim, written by Mariko Tamaki, illustrated by Jillian Tamaki
3. Jane, the Fox, and Me by Fanny Britt and Isabelle Arsenault
4. Bird by Bird: Some Instructions on Writing and Life by Anne Lamott
5. Rendezvous with Rama by Arthur C. Clarke
6. In Darkness (audio book) by Nick Lake

Total books for the year: 43

Still in Progress: A Monster Calls by Patrick Ness

None of the movies that I watched were standouts for me this month. Inside Out from Pixarwas probably the best, providing some beautiful animation and interesting ideas, but it didn’t resonate with me story wise.

Finished off season six of The Walking Dead (I’ve got four episodes left) and watched the new episode of season seven. I also watched half of the second episode of season seven, because Comcast is an asshole apparently. The start of season seven was particularly brutal and violent. As Michelle Jaworski of The Daily Dot writes, “It was draining, graphic, filled to the brim with so much violence that audiences barely had time to recover from one devastating moment before moving right onto the next one. This brutality made some people question why they bothered to watch.” I’m still watching, especially after seeing the start of episode two, which introduces King Ezekiel, who is kind and generous, if maybe a little delusional. He’s a refreshing character and I’m looking forward to seeing more of him.

Finished season two of Killjoys and I am incredibly satisfied with the way the characters have developed, how relationships have evolved, and what secrets were revealed. Many of the side characters have grown into more prominent roles with more depth and deeper story lines. The buildup of two seasons worth of mystery and the truths revealed were interesting and satisfying. Plenty of room for an exciting season and I’m excited to see what happens next.

Also, as a side note, I’d like to point out one of my favorite quotes from the show, said by Johnny to Dutch: “I’m sure it’s more complicated than I can ever understand, but speaking as a member of the Sh*tty Dad Club, you don’t have to forgive someone to miss them and you don’t need anyone’s permission to love someone you hate.”

It’s been a long time since I watched any anime. Neon Genesis Evangelion was certainly an excellent way to jump back into the genre. The story could simplistically be described as giant bio-engineered robots battling aliens, but the storying is actually far more complex with an existential exploration of identity and purpose in the world. The animation is sometimes incredibly beautiful and the animators sometimes linger on long drawn out moments, the still image holding out for longer than feels comfortable as a decision or emotional conclusion comes to the surface. It’s very powerful and unexpected.

I have four episodes left, and it’s complicated to the extent that I feel like I’m going to have to rewatch the series all over again in order to fully understand what I’ve experienced.

And last, but certainly not least, I rewatched The 10th Kingdom, a mini-series that I was not that into the first time I watched it. The rewatch was intended as a soothing return to a candy level story, but I was surprised by the interesting and unique choices made in the story. The incorporation of fairytale retelling is fun and fairly inventive, showing how happily every after falls a part after the fact rather than trying to rehash old tales.

I loved that although Wolf starts out as a bad guy, he immediately sets out trying to make himself a better person when he falls in love (or lust) with the lead. His way of winning her is not to coerce her into accepting his bad boy self, but to read every self-help book he can get his hands on and actively work toward making himself a better person so that he will be worthy of her.

There’s a lot about this that verges on being stupid and some parts that I fast forward through in order to get to the better bits, but this was just the sort of light viewing pleasure I needed this week.

A few of the notable podcasts from this month:

On Scriptnotes, Craig Mazin (sans John August) hosted a Secret Live Show at the Austin Film Festival, in which he interviewed four screenwriters — Katie Dippold (Ghostbusters, The Heat), Phil Hay (Clash of the Titans), Tess Morris (Man Up, The Love Punch), and Malcolm Spellman (Empire). All of the speakers had a few drinks before going on the live show, so their responses are slightly drunken, funny, and somehow a little bit wise. A lot of fun.

One of the many powerful Here Be Monsters episodes (HMB064) is  A Shrinking Shadow, in which a young woman describes her experience with weight loss turning into an eating disorder. It’s an important episode, as she explains how people would tell her how great she looked — for loosing weight, even though she was clearly sick and dealing with a deeper problem.

Uncanny Magazine podcast episode #12B features a fantastic story by E. Lily Yu, “The Witch of Orion Waste and the Boy Knight,” in which a young witch’s attempts to help a young knight best a series of dragons leads to misfortune. I love the ending of this, which doesn’t neatly wrap up but it fascinating and satisfying.

In the “Little Widow,” Maria Dahvana Headly tells the story of three wives who survive after their cult enacts a suicide pact.

Jason Fischer’s “Defy the Grey Kings” over at PodCastle is a grimdark fantasy story in which humans are slaves to elephant rulers. It’s brutal and bloody and a fantastic story.

I also loved Kat Howard’s “The Key to St. Medusa’s” published by Lightspeed Magazine, which is a sort of Blubeard fairy tale retelling, but is really a story of witches carving out safe spaces for themselves in the world.